Attus is made from inner bark fibers of trees like Manchurian elm or Japanese linden. Attus production has long been nurtured along the Saru River, and in the modern day the fabric has become a central Ainu craft. This led to the establishment of the Atsushi Textile Production Association (a voluntary organization founded in Nibutani) in 1969.

All of the processes marry the skill of human hands and the power of nature. Attus exists between the vibrant forests and the lives of people who coexist with them, and is woven from the long interaction between those two. Attus is characterized by breathability, durability, and outstanding resistance to water. The longer it is used the more it grows on the wearer, and it carries the kind of charm that only natural fibers can offer.

Attus is made all over Hokkaido, but the eastern Doto or northern Dohoku regions, Iburi, and the Saru River basin in Nibutani's Hidaka mountains became particularly known for it in the Edo period (1603-1867). The Saru River basin first appeared in records as an attus production center at the beginning of the 18th century. As attus was durable and water resistant, it became popular as a material for workwear in the herring fishing industry and for sailors on the Kitamae ships that travelled between Honshu and Ezo-chi. The cloth became a trade good distributed to Honshu island and areas further south. There are also Kabuki performances in which the actors wear attus.

The other attus producing areas of Hokkaido have undergone many changes, but in Nibutani the traditional techniques and skills have been preserved to the present day as a way to promote traditional craft. Records shows that in the Edo period (1603-1868), attus fabrics were already considered items of outstanding quality. Then, in 1878, British world traveler Isabella Lucy Bird came to Japan and, in her journal Unbeaten Tracks in Japan: An Account of Travels in the Interior Including Visits to the Aborigines of Yezo and the Shrines of Nikkō and Isé, she records products from Hokkaido and shows that attus was being actively woven in the Saru River basin. Then, in 1881, Austrian diplomat and antiquarian Heinrich von Siebold wrote a treatise on the Ainu people which records a pera weaving paddle essentially identical to those used today. Furthermore, records dating back to 1904 show that Ainu artifacts collected by Frederick Starr, an anthropologist at the University of Chicago, included some attus pieces from the Saru River basin.

Weaving was women's work, but men were the ones who went into the forests to collect the best materials, so cooperation was essential to making attus. In the past, each village had a place, called an iwor, to collect not only bark for fibers, but all the necessities of life. Those spaces have been preserved from generation to generation, and today people still work to carefully preserve these natural spaces. In Nibutani, the Nibutani Craft Cooperative Association is helping to pass on the skill of making attus using the same style of tools as those used hundreds of years ago, as well as making and selling attus goods. 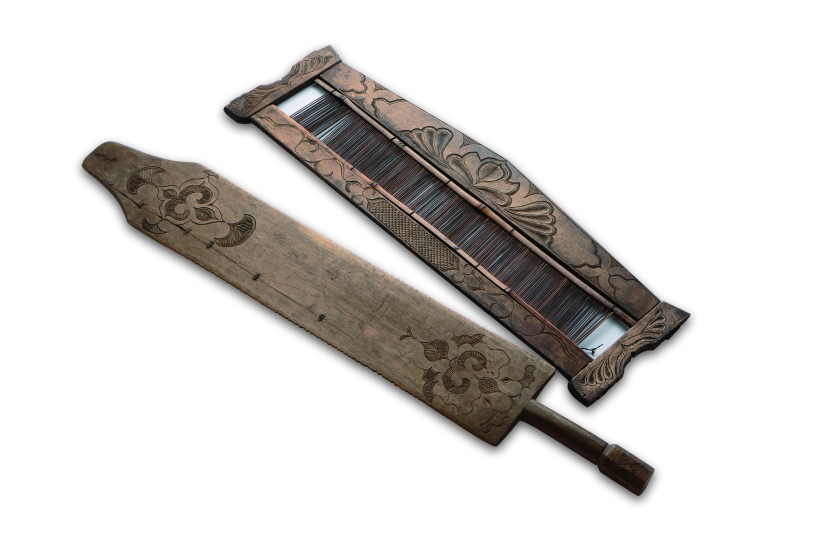 Traditional Crafts
Nibutani-ita
Tale of the Nibutani-ita
Nibutani-ita is a flat wooden tray made in a style that has been handed down for generations in the Saru River basin, and is now centered around Nibutani, Biratori. Ainu traditional culture includes a strong tendency toward decorating items for daily use with beautiful patterns, and Nibutani-ita is a wonderful example.
See More
Encounter authenticity, and take it home.
You can purchase ita or goods made from attus at the Nibutani Craft Center inside the Ainu Culture Information Center of Biratori, or at one of the many workshops on the Street of Artisans.
See More
TRIP & CRAFT
Ainu Culture of Biratori: Time Found Nowhere Else
Ainu Culture Trip
Your trip to explore Biratori's Ainu culture starts here!
See More
Traditional Crafts
Tale of the Nibutani-ita
See More